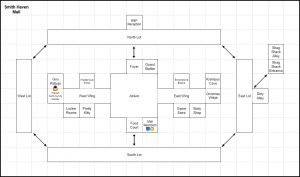 The large mall has become the home of the mall rats, who are patrons who became rats enamored with their new, vapid lives at their mall. They are friendly and mostly harmless if left alone. But beneath the mall are passages leading to the city's underground and many sinister things lurk there in the dark.

Down from the Mall Restroom leads into the Mall hunting area (sewers).