A mostly humanoid male with ferret-like ears and a long, sinuous tail. He has a twitchy animal nose with whiskers around it. He has a slightly rumpled suit on, still looking good despite his changes. He is a pleasant enough looking person who looks even better in those moments when he's not stressed or worried by his clients.

Alex can be found in the High Rise District through the Meet Alex event. Alex asks the player to help find his clients. Should the player refuse, they may later accept by visiting him in Alex's Condo.

Upon return with the client or with their status, the player is given one food and one water along with a game extension. Lorenda adds 24 hours, Darryl adds six, and Lee adds a day and six hours (two days twelve hours total). 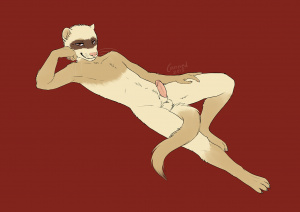