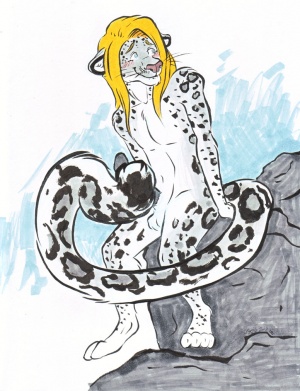 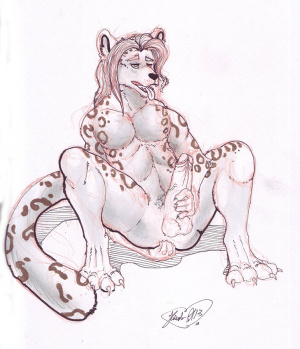 Starting: Sven is tall and well-built, looking roughly 20 years old. He has long, blonde hair, blue eyes and Nordic features. Poking from his golden hair are a pair of feline ears. These, along with his tail, are his only visible signs of infection. He clutches the fluffy snow leopard tail nervously, petting and wringing it in his hands. He speaks in a soft, shy voice with a Scandinavian accent. He has a light t-shirt and shorts on, but still seems quite hot in the relatively cool basement apartment.

Sven's appearance (and even name and gender) may change depending on the player's actions. Currently, the confident Sven variant can only be attained by passing a charisma check during Sven's rescue fight.

Sven is a male snow leopard-morph NPC who can be found in the Red Light District as part of an event called "Hidden Kitty". Sven is running low on water and asks the player for some. Once found, if the player does not give him water for two and a half days, he will be removed from the game. He can be given water once a day for three separate days. Returning a day after the third bottle, while talking to Sven, a Snow Leopard tries to break into Sven's Place. The player then has the choice to face the beast alone or try and rally Sven to join the fight. If the player passes a charisma check trying to rally Sven, his confident variant is unlocked. If the player wins, they may move Sven either to the Porn Store if it has been discovered, or to The Grey Abbey.

Sven, or should we say Svetlana, has become a fully snowmeow person, but female as well. It seems that Lisa's influence on the kitty has made her more to the mouse's liking. Svetlana wears a red bathing suit that struggles to contain her ample bosom of six breasts. Her snow leopard marking have become pink in colour, as has her much longer pink hair. Even her eyes are a bright pink. Her head is fully that of a feline's and her hands have become paws. Around her neck, she wears a pink collar with a round, silver bell on it. The snow leopard seems a little more quiet and nervous around you, though she certainly seems to be enjoying her new body. She clutches her fluffy tail and strokes it when around you. She still blushes a little at some of the toys wares, but seems eye them longingly as well, as if wondering which her musine mistress will share with her next. At these times, her paws wander over her body, tweaking a sensitive nipples or stroking over her damp crotch. To help her keep from being too overheated in the store, Lisa has taken to helping her kitty pet trim her fur. This keeps her a little cooler and shows off her feminine curves better.