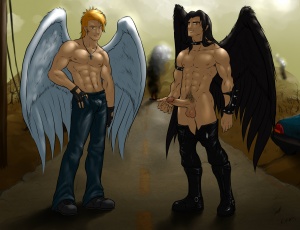 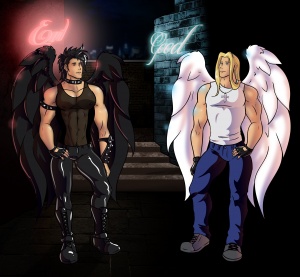 Good Elijah: Elijah is tall and well-built, looking an early 20 years old. He has an unlined, very pretty face with azure eyes, crowned by an impressive mohawk of golden blond hair. Lately, he's often up and about, strolling out into the library and the nearer city blocks or having a look around from the air. He's taken up wearing a pair of tight jeans and military boots he found somewhere, leaving his chest bare and showing off some handsomely sculpted abs. His large white wings are folded together behind his back, but tend to spread out a bit and move animatedly when he's talking to you.

Evil Elijah: Elijah's form holds a terrible beauty that makes you shiver inside. His body is tall and well-built, looking an early 20 years old. He has an unlined, pretty face with glowing red eyes and a superior smirk, framed by long strands of night-black hair. He's taken up wearing tight leather pants and leather bracers with spikes on the side, leaving his chest bare and showing off some handsomely sculpted abs. Large, black-feathered wings are folded together behind his back.

Elijah is first met in the Red Light District through the Angel vs Demons event. Elijah saves the player from hellhounds, but is captured in the process. If the player wishes to save Elijah, they have four days before he is irreversibly corrupted (and removed from the game).

Once cured, Elijah is available for sex.

Elijah can interact with the following NPC's if they have been brought to the library:

Evil Elijah has special interactions with the following NPC's: