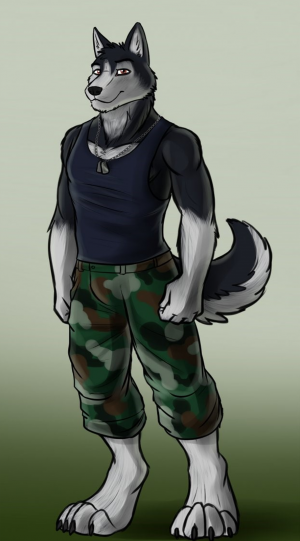 Carl Banning is a well-built young male soldier, now transformed into an anthropomorphic husky. He wears a dark undershirt and the camo pattern pants of a normal military uniform, though he had to give up on boots since his digitigrade paws wouldn't fit in them. His behaviour shows that he's a bit unsure of himself, unnerved by the automatic reactions and inherent mannerisms of his body, like movements of his tail and ears. Maybe he just needs some time to get used to it all.

To gain Carl as an NPC, find and repeat the Soldier Squad event in the Warehouse District six times. Carl will be running from Allen and the player is given the chance to bring Carl to the bunker. If the player immediately attempts to have sex with him in The Grey Abbey Library, he will ask the player to hold off, as he fears he will given into submissiveness. If the player refrains for several days, Carl will stop being as submissive. If the player decides to indulge before that point, Carl will remain submissive.

The player may choose instead to simply let Carl pass by to watch Allen reclaim his Beta bitch, or choose to set him loose rather than bring him to the Library.