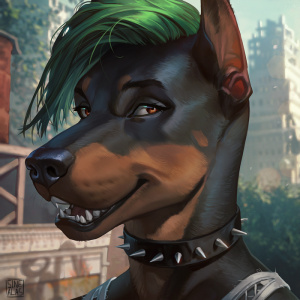 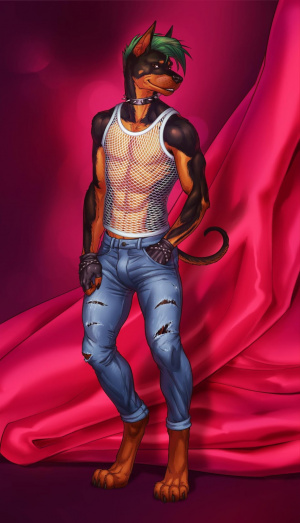 Spike is a young doberman that looks to be about eighteen years old. He clearly has been working out a bit, giving him a toned but not too bulky physique that should serve him well in a fight. The young man is dressed in a pair of ripped jeans, a skin-tight mesh shirt showing off his toned chest, as well as a loose-fitting collar around his neck, studded with spikes. With half of his head hair shaved off and the other half dyed neon green and hanging down one side of his face as a middling long strand, he certainly has a memorable look.

Accompanying you on your travel throughout the city, he is never far away, usually just a step behind and a little to the side, serving as muscle and glowering at anyone who might dream of crossing you. As he notices your attention on himself, the doberman strokes a hand through his green-dyed hair and gives you a respectful nod.

If Alexandra has been recruited and had at least one litter of pups along with moderate waiting period, Spike will randomly be waiting for you to arrive at the Grey Abby Library. Due to wanderlust and the want to break away from his mother, he will approach about joining the player as a companion. The player can either accept his proposal, order him to return to Alexandra or tell him to seek his adventures elsewhere. If his offer is accepted he can be found in the northeast section of the second floor. From here several paths can be taken when interacting with Spike in the library.

Depending on which route the player takes can also influence which names can be chosen for him to use. By default he will the address the player as "boss" like his mother but choosing the the first option in his dialogue will allow the choosing of a new title. He will refuse to call the player "Master" or "Mistress" unless the player took the forced route for his sex options.