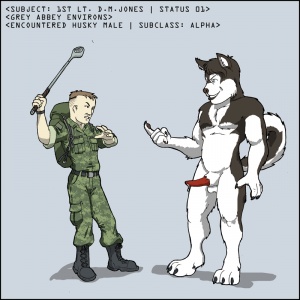 You blink in surprise as a large handsome anthro husky male appears in front of you, his slim canine muzzle drawn back in an amused grin as he looks you over. Returning the examination, you see that he has a handsome coat of lovely husky fur, and a nice perky husky tail wagging behind him, as he obviously enjoys what he is looking at. The beast is obviously one of the rare male alphas that take care of and probably made the many slutty husky bitches around the city. "You look like you will make a fine bitch for me..." the alpha husky says as he rubs his very canine paws together. His thick, erect, canine cock bobs with excitement and the knot at the base is already starting to swell with anticipation as he strides forward eagerly!