From Flexible Survival
Revision as of 17:12, 17 December 2016 by Ishim (talk | contribs) (Good Alexandra can now be told about and meet the G-Shep Squad out in the city.)
(diff) ← Older revision | Latest revision (diff) | Newer revision → (diff)
Jump to: navigation, search
Alexandra 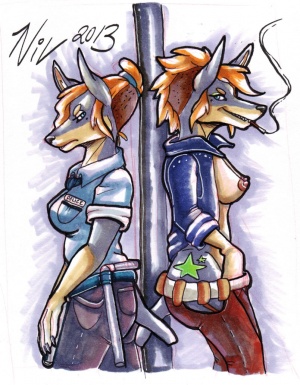 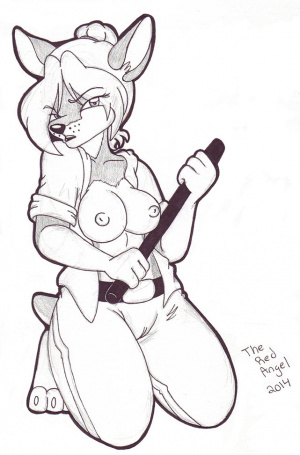 Worn Down Doberman Cop by The Red Angel

Good Alexandra: Alexandra, once a cop for the city, has been transformed into a Doberman woman by the infection. She's remained in uniform, showing her attempt to keep up her duties, wearing a light blue shirt, darker pants and a policeman's hat. She's got a rather normal, human build, but with some traces of canine features, showing especially on her paw-like hands and feet. Her head is fully that of a Doberman Pinscher, with a long muzzle and her short fur has the two-tone black and tan markings of the breed. She has an average sized rack on her under her shirt.

Bad Alexandra: The Doberman female has divested herself of her cop uniform and instead picked up a leather jacket and ripped jeans more suitable for the bad dog she's become. She has a strong, tough physique while still having a womanly figure with an average sized pair of breasts and a firm ass. Her two-tone black and tan fur is a little disheveled and scruffy, especially atop her head where it's been styled into short spikes. No longer restrained by her earlier desires, she's no longer suppressing her lustful urges and can often be seen masturbating or even performing self-cunnilingus. She's found herself a black choker to wear in imitation of a dog collar to further show herself to be your fucktoy pet bitch.

Alexandra is found as an encounter during Outside Exploration. To turn her into the player's bitch, the player must defeat her in combat and engage in victory sex with her over the course of multiple encounters. Alexandra's lust will grow until she submits to the player and stops being a cop. The player brings her back to The Grey Abbey Library. She is available for a variety of sex scenes and has scenes with Fang as well. Bad Alexandra has specific endings. She can be impregnated, producing (unseen) Doberman pups. Her dialog includes comments on a lot of the other NPCs residing at the library.

The player encounters Alexandra in the same way during exploration, but instead chooses to submit rather than fight. To access the good path for her, the player must submit immediately upon your first encounter with her - doing anything else as your first action blocks this path, even on future encounters. Surrendering will open up a dialogue where the player may choose to attempt to befriend her, requiring a charisma check. If successful, Alexandra will tell the player the location of the Police Station. Failure grants a bonus to this check on your next attempt.

From this point, Alexandra offers a number of tasks, which are part of a progressive quest series and others are secondary tasks. Some of the secondary tasks only become available as the quest content is advanced.

These main elements proceed in order and must be completed before advancing to the next.